CBD and diabetes in dogs

Man's best friend also shares certain diseases with him, and diabetes mellitus is one of them. This disease prevents the proper regulation of blood sugar levels. This results in a chronic increase of glucose (sugar) in the blood. This is called hyperglycemia. Let's find out together, what the causes of the disease are, how to cure it, and what the benefits of CBD (Cannabis Sativa) are for the diabetic dog. 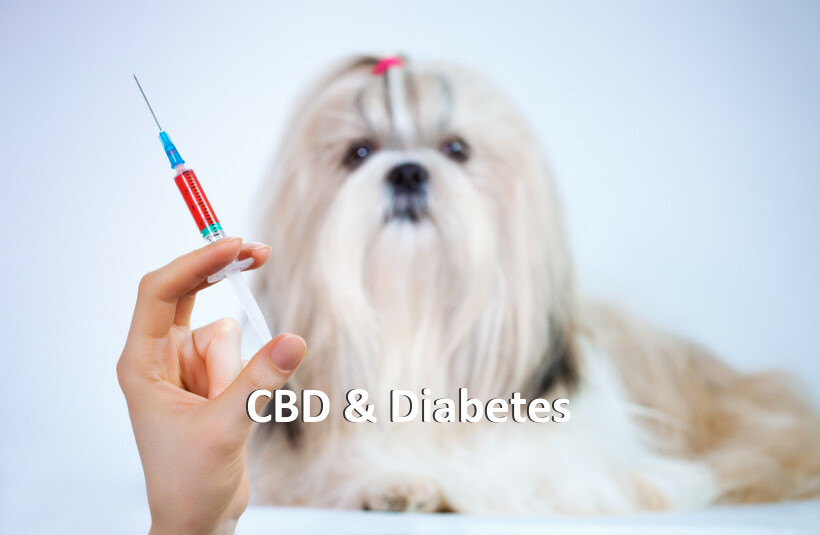 Diabetes is a disease that results from the misuse of glucose by the body's cells due to a deficiency of insulin. This causes a chronic increase in the level of glucose (sugar) in the blood. This is called hyperglycemia. It gradually causes damage to the dog's body. Without treatment, diabetes can lead to severe complications such as blindness, neuropathy, kidney failure, death.

There are 2 types of diabetes

It is the most common type of diabetes in dogs. The pancreas no longer produces insulin, or produces too little insulin, it is insulin-dependent diabetes.

This so-called non-insulin-dependent diabetes is characterized by chronic hyperglycemia. The body's cells have developed resistance to insulin.

In the diabetic dog, the following disorders are often found:

If your dog appears to be exhibiting some of these symptoms, we recommend that you make an appointment with your veterinarian. Your dog will be examined, and urine and blood tests will be done to look for certain signals, such as the presence of high levels of glucose. Your dog will be prescribed treatment based on the results:

This is the most dangerous of the two. The dog will have to receive one or two injections of insulin per day, according to the veterinarian's prescription.

Insulin may not be necessary, but the dog's diet will need to be modified, especially with low-carbohydrate kibbles, so as not to raise blood sugar levels.

Cannabidiol, more commonly known as CBD, is a cannabinoid derived from industrial hemp (cannabis). Cannabinoids are molecules that interact with cannabis receptors in humans and mammals such as dogs. Our bodies naturally manufacture cannabinoids. But sometimes this production is not enough. The body then finds itself in a state of chronic endocannabinoid deficiency syndrome. All mammals have several systems, such as the endocrine, circulatory, nervous, etc. system. However, there is one system that is still little known, the endocannabinoid system. To simplify, we could say that its role is to manage the other systems. It is the system of systems. Some studies suggest that a dysfunction of the endocannabinoid system could be the cause of many diseases. Cannabidiol (CBD), can mimic the action of cannabinoids in our bodies. When we give CBD hemp oil (Cannabis Sativa) to our animals we support their internal cannabinoid system. This CBD hemp oil comes from industrial hemp (Cannabis Sativa). CBD is authorized in France and many European countries since 2018.

What if CBD could help your diabetic dog ?

Several studies show that CBD can have a very favorable action on diabetes and prevent damage to the blood vessels.