Multiple Sclerosis (MS) is a neurological disease that affects 400,000 people in Europe and 2.3 million people worldwide. MS is an inflammatory disease affecting the brain, spinal cord and optic nerves. It is the most common autoimmune disease affecting the central nervous system. Non-fatal, it affects mostly women. Let's discover how Sativa cannabis and more specifically CBD oil can improve the lives of patients. 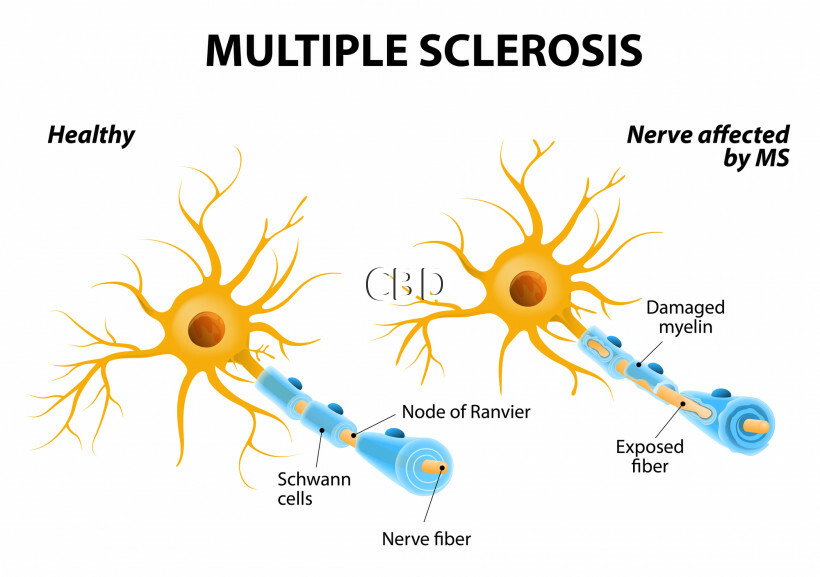 Multiple sclerosis (MS), is an inflammatory disease that will affect genetically predisposed people, but can also be favoured by environmental elements. This disease is called autoimmune, because it causes the immune system to attack the myelin. The body therefore attacks itself, no longer differentiating between the "self" and the "non-self". In the case of MS, it is the Central Nervous System (CNS) that is affected. The CNS includes :

The brain is the conductor of our body. It regulates all vital functions, receiving and sending information throughout the body via the nerves. Its weight varies from one adult to another from 1300 to 1400 grams in humans. The brain contains more than 100 billion neurons, and it is precisely these neurons that are affected by multiple sclerosis (MS). A neuron is a nerve cell whose job is to transmit a signal. It is composed of a cell body and two extensions, the axon and the dendrites. The axon is surrounded by a whitish protective sheath made of myelin, which also promotes better conductivity of information.

Multiple sclerosis causes the destruction of the myelin that surrounds the axons of each neuron. Exposing the axon loses its effectiveness in transmitting nerve impulses. Generally, the disease begins with an attack during which symptoms appear, the myelin is attacked by an inflammatory phenomenon causing its destruction. The axon is no longer protected by its sheath and is in pain. Most of the time, this inflammatory flare-up is brief, and a process of re-myelination begins. The neurons function optimally again in the best of cases. However, it happens in the course of the disease, that the successive repairs are not complete, symptoms may then persist:

Multiple sclerosis is a disease with no cure at present, but it reduces patients' life expectancy little or not at all.

MS relapses are treated with high-dose corticosteroids for several days. Because symptoms are not always the same from one person to another, treatments may be different. Symptoms can also vary in intensity depending on several parameters such as fatigue, morale and activity.

CBD oil is produced from Sativa cannabis, more commonly known as industrial hemp. CBD (cannabidiol) is one of the most famous cannabinoids, as its therapeutic potential is vast. Several studies have shown that CBD can alleviate the symptoms of multiple sclerosis and improve the lives of patients.